As the director of technology at a premier Modern Orthodox high school for girls, I regularly interfaced with high school girls whose confidence in their use of technology was low. For a few years, we offered Visual Basic, Java, then Python, but no matter which computer programming language we offered, the interest was minimal. One day, a student shoved her laptop towards me in resignation, lamenting that she was simply “not good at this technology stuff.” Her frustration was palpable. At that moment, I determined to find a way to tackle this debilitating mindset towards technology. A thought percolated in my mind: What type of experience would we need to facilitate so that our students would view technology as a valuable tool enabling them to further their reach and realize their unique perspectives?

I discovered a website highlighting the work of creative technologists who used electronics and code to create elaborate works of art. The High Low Tech group’s self-proclaimed goal is to “engage diverse audiences in designing and building their own technologies by situating computation in new cultural and material contexts, and by developing tools that democratize engineering.” They do so by exploring “the intersection of computation, physical materials, manufacturing processes, traditional crafts and design.” Everyday objects intermingling with, and enlivened by, electronics was mind-bending and spectacular.

For example, the Living Wall is a “smart,” dynamic wallpaper that can be programmed to monitor its environment and control lighting and sound. It affords a subtle but beautiful way to add computation to an everyday object. Simply touch the wallpaper to turn on a lamp, play music or send a message to a friend. The seemingly ordinary and flat wallpaper becomes “smart” through a paper computing kit whose pieces serve as sensors, lamps, network interfaces and interactive decorations.

Could the fusion of art and computation be the winning combination that would transform girls from passive, reluctant users of technology to active, proud producers? To test, I started a “Tinkering Club” in which we made whimsical electronic projects that were difficult to categorize: musical stairs; paper circuitry menorahs; “about me” animations. I soon realized that the context of creation was more important than the scaffolding of skills. Once students reached a pivotal level of wonder and curiosity, they would push through the inherent complexity with much more grit and stamina than when presented with a rigorous but dry challenge.

On a quest, I began traveling the country to attend multiple Makerfairs, which are large gatherings of electronic enthusiasts who share their often-peculiar creations. While some of the displays had real-world relevance, the majority were pure fun: a helmet that will direct the wearer through vibrations on each side based on the input of a remote control; slithering robots; fire-shooting contraptions; counterculture DIY retro games. In the broadest sense, Makerfairs are celebrations of the creative spirit of humanity harnessing the power of technology.

As I explored the creative world of computation, I was simultaneously surveying the educational landscape of STEM education. I visited elite private schools, yeshivot with advanced STEM programs and magnet schools. Each time, I was struck by the underrepresentation of girls in the classroom. Teachers were apologetic and explained that they were working on balancing the gender ratio.

In one class where I was introduced as an expert in STEM education for girls, the boys asked me point blank: “Why are girls not into STEM like we are?” When asked how they would answer, they responded, “It’s genetic.” We know that this common assumption is incorrect. The data is clear: female students’ achievement in mathematics and science is on par with their male peers. According to the National Science Foundation, female students participate in high-level mathematics and science courses at rates similar to their male peers, with the notable exception of computer science and engineering. This exception is most likely due to the contextualization of STEM in gender-specific and flat representations. The boys were right; the girls are not into STEM “like they are” because STEM has typically been taught in a very specific, male-gendered way.

This discrepancy permeates even the most progressive publications such as MAKE magazine, the publication for the flagship MakerFaire company. Leah Beuchley, a former MIT professor who spearheaded the High Low Tech group there, analyzed the first 36 covers of the magazine and found that the photos portrayed a “very narrow definition” of Making and STEM activities. Of all covers, 53% focused on pure electronics, 31% on vehicles, 22% on robots, 8% on rockets and 5% on music. In a conference address, she pleaded for a wider application of technology that is more than just robots or more male-oriented applications, and could include algorithmically designed pottery or data-visualization through ornate craft. What’s more, of the 40 people featured in MAKE, 85% have been white men and boys. If more artistic and culturally diverse applications were displayed and if more female role models were portrayed, then women would be able to relate more to STEM professionals and might be more attracted to this innovative work.

Teenage years are often fraught with the need for individuation. I began to entertain the notion that the playful elements found in the Maker movement could be a model that would offer teens a healthy and expressive way to redirect their angst into creative technological contraptions. One way to achieve this is to provide instructions that give just enough direction but do not dictate all the necessary components or steps for the project. For example, when students need to create a moving vehicle, we should provide them with enough room for personalization while simultaneously providing enough scaffolding to minimize frustration.

There must be room for challenge and personalization. I witnessed one student using a small shoebox to build a moving car, which was designed as a Dalmatian dog. In addition to controlling two motors and an ultrasonic sensor, the student wanted to add a wagging tail using a servomotor. Her effort to personalize her vehicle took her to the next level of complexity in her code. She also became so engaged by her creation that she labored over it during class and lunch hours in order to hone her craft to perfection.

One of the most impactful ways of achieving this level of absorption and technological dexterity is through the focus on student-driven capstone projects, which is the cornerstone of the engineering curriculum provided by CIJE, the Center for Initiatives in Jewish Education. The project lets students create an innovation propelled by student interests. In a recent project, a student who had a blind uncle created a device that would sit on a seeing-eye-dog’s collar and alert paramedics if the dog’s charge was in physical danger. Students in the CIJE network are supported by an engineering mentor and given funds to purchase an array of components needed to bring their idea to fruition. The project culminates in a celebration that takes place in a large conference center with more than 450 projects displayed, produced by over 1,200 students. The young engineers must explain and answer questions posed by seasoned professionals in the field.

If the general contextualization of STEM is taught through male-oriented projects and end goals, then it should be no surprise that girls don’t buy in. I would also bet that there are many boys who also aren’t fully engaged by this approach. Perhaps if STEM conjured up a wider array of possibilities, such as the idea of living wallpaper or decorative wearable technology with easy wins and personalization embedded throughout the learning process, more students will see it as a powerful expressive means. Initially, they might not care enough to sort numbers (a beginner’s programming exercise), but they will care enough to add a wagging tail to their contraption. Both exercises will push students to hone their coding skills, but the personalization approach might even give way to a passion.

Research supports the contention that men and woman seem to favor different learning styles, and the didactic approach usually associated with STEM subjects works best for men than for women. Women might opt out of a discipline based on the learning style that is most prevalent in that discipline. It’s not due to inability but rather a lack of interest based on how they perceive the learning will take place in the classroom (D’Allegro, Dickinson and Kulturel-Konak, “Review Of Gender Differences In Learning Styles: Suggestions For STEM Education”).

Seymour Papert was a mathematician, computer scientist and educator, pioneer of artificial intelligence and, most notably, the creator of the constructionist learning theory. He coined the term “low floors, high ceilings” as a guiding principle in developing educational technologies: allow novices quick and easy wins through low-barrier projects that include the ability to increase the sophistication over time. Mitch Resnick, head of the MIT Lifelong Kindergarten group at the Media Lab, adds another important dimension: wide walls—a diversity of pathways to engage personal interests with the freedom to explore and tinker in the process.

Learners come with a unique blend of backgrounds and interests, which makes it difficult to craft an equally engaging project for all students. When structuring classroom experiences, we need to allow a diversity of pathways to the project. Wide walls became a guiding design principle for Mitch Resnick and his team. For example, consider the Scratch programming language, which Resnick’s team developed. Scratch is explicitly designed so that kids can create a wide range of projects, “not just games, but also interactive stories, art, music, animations, and simulations.” This three-pronged approach—low floors, high ceilings and wide walls—greatly enhances student engagement, especially for students who chafe in robot-centric STEM approaches, which is most dominant today.

Paulo Blikstein of Stanford, a researcher of Maker spaces, suggests that educators should think outside of the “STEM Box” and recommends pairing up with teachers of other disciplines to create powerful units that combine diverse disciplines: biology and engineering, or history and math, for example. This interdisciplinary approach greatly enhances the range of projects that can be created in a Makerspace, and, in the process, allows for the diverse interests of students.

No one truly knows what the future job market will look like, particularly given the anticipated advancements in artificial intelligence. But one thing is for sure: the future is being created by engineers, and the process of engineering the future should be shaped by both males and females. According to Blikstein (“Children Are Not Hackers”), “We have the once-in-a-generation opportunity to establish something truly new in schools, make it sustainable and deeply integrate it into the school day. We have the opportunity to give millions of children a new entry point into the world of knowledge and science, and give them a much richer palette of expressive media for their ideas to come true.” With the proliferation of inexpensive electronics, outfitted Makerspaces and wide-walled curricula, we can give girls as well as boys this new entry point. 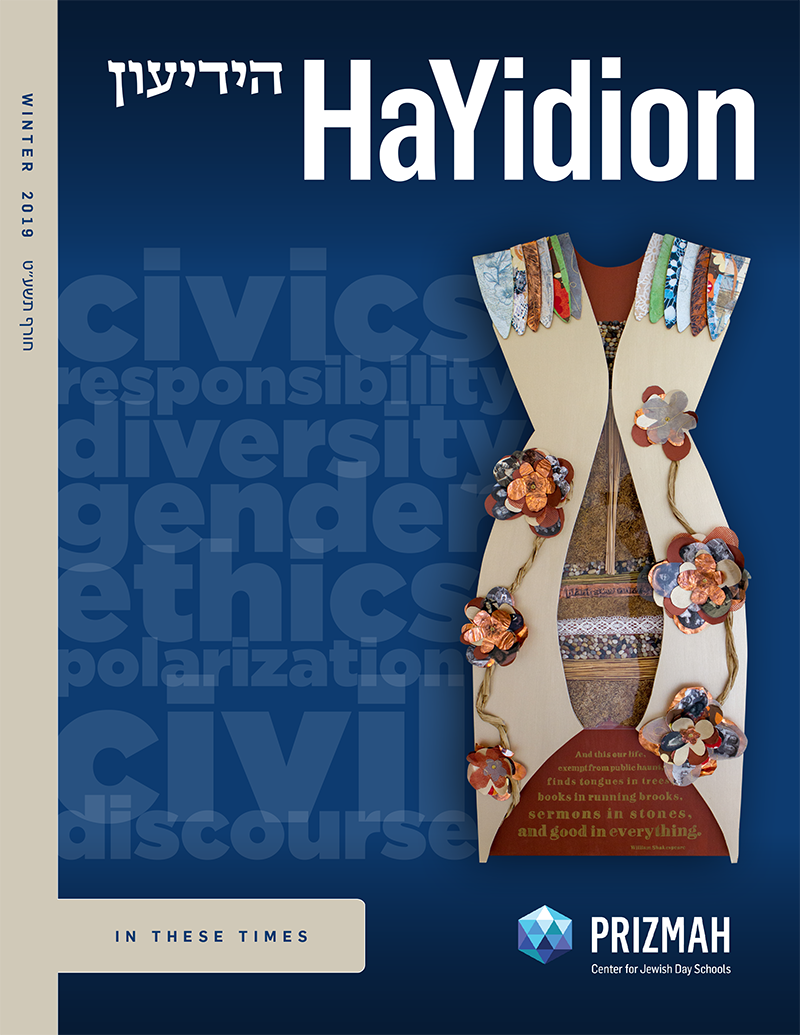