During my visits to Jewish early childhood schools, day schools, congregational schools and professional conferences and meetings, I have observed many wonderful educational processes. I also witnessed one unsettling discussion teetering on fear, about being “too Jewish.” I’m not quite sure what that means, but I am sure that if you ask ten people you will hear ten different definitions. I have also cringed when people defined Reform settings as the ones that “do less” in the Jewish observance arena. It is disturbing to me to be among those defined by what “we don’t do” rather than by “what we do.” It is, moreover, ironic, because much of what Reform Judaism’s identity rests upon is action and social justice.

From my perspective, it doesn’t matter if you replace the word Reform with Reconstructionist, Humanistic, or Conservative. There are many ways of living Jewishly, of practicing Judaism, of developing a relationship with G-d, of interpreting Torah, of prioritizing according to Jewish values, of making choices according to our traditions, and understanding our rich past in order to plot out the future.

In the past few years, leaders in the Jewish Early Childhood Education community have been working to identify and bridge gaps when our families transition from their years in early childhood and move into elementary education. Serious dialogue has begun to focus on creative programming to engage families before exit and entrance points in their Jewish community involvement. Often the relationships developed in the early years are personal and very close and the trust developed between child and teacher, director and family can have enormous influence on the next steps in a family’s Jewish life.

Early Childhood Education Directors offer guidance about choosing schools for kindergarten and elementary education. Imagine the increase in these offerings if they had a full breadth of understanding and a personal/professional relationship with the local day schools as well. Also, a day school may better understand the needs of the incoming family by having interaction with the leaders of the local early childhood education professional staffs. What are these families looking for Jewishly? How can a partnership be established with the synagogue so that all their communal and spiritual needs can be met? How can the two institutions provide a balanced set of choices for the families? “We could get far more learning, engagement and enthusiasm if we thought more about coordination. Jewish institutions are disconnected from one another, and would operate better if they were linked,” wrote Jack Wertheimer in “Linking the Silos: How to Accelerate the Momentum in Jewish Education Today.”

Certainly the intensity of the Jewish experience and exposure offered in a Jewish early childhood setting varies greatly from school to school. We know from recent research that the Jewish aspect of a school is not the reason why parents choose an early childhood program for their children but it does become an important part of the family’s home and synagogue life and influences their religious practices. Ruth Pinkenson Feldman’s study of Philadelphia Jewish parents showed that when parents enter their preschool children into Jewish-content child-care programs, the Jewish observance level of he entire household becomes more extensive.

It does seem that one needs a really good recipe to make a school appealing to families. The ingredients must be carefully measured and the ratio between them balanced in order for the product to be savored by the consumer. The challenge however, is that each and every consumer has different tastes different dietary restrictions and different vitamin needs. It almost seems an impossible task.

There is, however, a common denominator: relationships and community. Throughout the Torah, we see separation from the community as the consequence for mistakes or punishment for wrongdoing. When children in a classroom disregard another’s space or are disrespectful of their safety or dignity, they must be separated from the group until they are able to function as a productive member of the community. The corrolary is that being a welcomed member of a community where your presence makes a difference and is valued is the greatest gift we can provide to our families.

Each congregation, early childhood school, religious school and day school has the potential lto meet people’s social needs by creating an extended family. They can reach out to one another, and link arm in arm for a larger and stronger community. And Wertheimer wrote, “It doesn’t help a community grow if these schools all act independently. It’s important for all schools to support one another.”

Nancy Bossov, R.J.E. is the Director of Early Childhood Education at the Union of Reform Judaism in New York. Nancy can be reached at nbossov@urj.org
Author
Nancy Bossov, R.J.E.
Issue
Too Jewish? Not Jewish Enough?
Published: Summer 2007 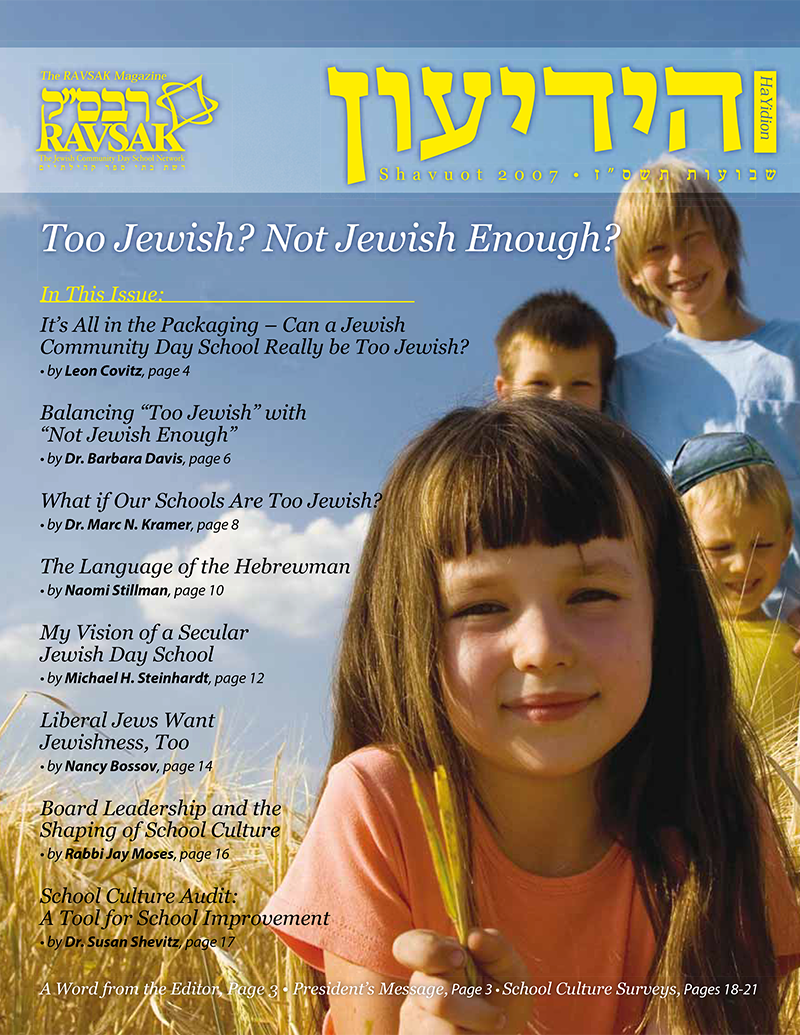