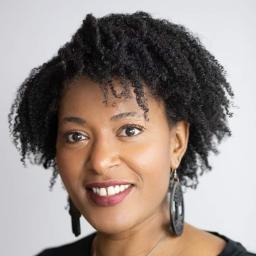 Stacey is a public speaker, writer, educator and urban planner. As a Jewish woman of color, combating racism and antisemitism are central to her work. She has dedicated her 20+ year career to community development and Jewish social justice, education and engagement. Stacey has a BA in political science from the University of Cincinnati, a master's of urban planning and public policy for UIC (Chicago), and certificates in Jewish leadership/adult Jewish learning from Spertus Institute.

Today’s 21st century Jewish communities in America and Israel are among the most socially diverse communities in Jewish history. Of the 7.5 million American Jews, 1 in 5 American Jews are Jews of color (JOC) or non-European/Caucasian descent. According to the most recent Pew study, nearly 20% of all American Jews identify as non-European and 10% identify as Sephardi or Mizrachi. Eight percent collectively identify as Black, Asian, or Latin American. This number nearly doubles for people under the age of thirty. Another recent study highlights the fact that a significant number of Jews who are racially and ethnically diverse have described experiencing racism within the Jewish community.

To address the complexities of identity and belonging issues and heal the social inequities and injustices that have impacted the Jewish people in North America and around the world, Jewish leadership and educators must also be representative of our diversity. In addition, many ethnically diverse Jews have intersecting identities that makes the issues of racism and antisemitism simultaneous concerns. We have an opportunity to model our mosaic of diversity in our educational leadership and in our future educator pipelines. In order to design thoughtful solutions to the lack of diversity in Jewish leadership, we must acknowledge why it has been difficult to address.

First, there is a lack of education on the rich diversity within our Jewish community, beginning with our youth. Too often, the first encounters with racism for a Jewish person of color occur within their own community via day schools, religious schools and camps, resulting in far too many becoming estranged from Jewish life. Our curricula can go beyond the Ashkenazi experiences of the Holocaust to tap into the wells of knowledge from Jews of all racial and ethnic backgrounds and experiences in America and around the world. All of our youth need to be able to see representations of diverse Jews, from chachamim of antiquity to modern day Jews. And for those with non-European heritage, learning how those similar to them contribute to the beauty of Jewish life enhances their Jewish pride and self-esteem while also enabling them to stand up to antisemitism and racism, which frequently come from the same foundation.

Secondly, the predominant culture wars and identity politics pressure Jews to choose supporting social justice over being Jewish or choose only one aspect of their identities, such as being Black. Their Jewish identity is often unwelcome in such spaces. This conundrum is particularly challenging for Jews of color who are often vulnerable and may already feel like outcasts from our Jewish community. They may constantly have to prove their Jewishness. In the spirit of Dan le-khaf zechut, judging people favorably, the missteps are often coming from Jewish students who have not had the opportunity for education on Jewish diversity, and for some, little to no interactions with Jews unlike themselves.

At best, Jews of color often choose emotional, psychological and even physical exile from Jewish community. At worst, some may divert their talent and energies into movements or causes hostile to the Jewish community, some of which even demand they deny their Jewish identity. By enlivening our curriculum with deep Torah, as well as lifting up the richness of our diverse Jewish heritage, we have the opportunity to ingather our exiled, kibbutz galuyyot, to build up a foundation to support our future Jewish leaders and educators.

Lastly, the Jewish communal ecosystem acknowledges it is behind in addressing equity, diversity and inclusion. Few organizations have strategies to recruit, develop and retain diverse Jewish leadership. Our educational leadership has an opportunity to include the full range of Jewish diversity whether ethnically, nonnative English speakers, women, disabled and more. We should be asking ourselves, “Where are Jews of color and other identities in our midst?”

At the same time, we must develop pathways for the leadership and mentorship of our diverse future educators. I hope to see many of you at the Prizmah Conference in January, where I will present on “Diversity and Inclusion & the 21st Century Jewish Educator.”

The Torah hints for us to see opportunity in Jewish diversity in Genesis 48:4: “I will make you fertile and numerous, making you a community of nations [kehal amim].” It could have said, “I will make you a community, kahal,” or just an “am,” nation singular, but as Rav Hirsch’s commentary on Gen 48:4 calls us to see, the secret to the strength of the Jewish people lies in our diversity.