A Reform Approach to Tanakh Education

It is somewhat paradoxical that I developed a Reform outlook on Torah from an Orthodox rabbi, but I was not the only one who found Rabbi B. Barry Levy’s introduction to Jewish studies at McGill University an eye-opener. The only text for the course was a Tanakh, in any form, and the required reading was all 24 books of the Hebrew Bible. While I was familiar with Torah and certainly the major stories of Shoftim and Yehoshua, this class introduced me to the depth of narrative and human insight in the stories of the kings, the minor prophets, and the wisdom literature. The lessons driven home by Professor Levy continue to influence my thinking on how I understand Torah and have shaped the way holy text is taught at The Leo Baeck Day School in Toronto.

Leo Baeck, the only Reform day school in Canada, embraces an international mindset centered in critical thinking and was authorized last year as the only Jewish International Baccalaureate World School in North America. Inherent in this educational philosophy is the belief that multiple perspectives best enable us to deeply investigate any problem, an approach mirrored in the traditional Jewish dialectic of biblical interpretation. Two key messages which formed the basis of Professor Levy’s teachings have helped to shape the way Leo Baeck approaches the study of Tanakh.

The Hebrew Bible was not written in a vacuum

In addition to a close reading of Tanakh, Rabbi Levy helped me to view biblical text and stories within a historical context. I developed a love of archaeology, studied ancient Near Eastern cultures and a range of Semitic languages, including Aramaic and Syriac. And just as he presented Tanakh to eager undergraduate students, we too teach our students to see the parallels between the holy text and the historical world around it. A familiarity with Hammurabi’s Code and the Epic of Gilgamesh are more than useful in understanding the legal and literary context of Tanakh, a message we teach from a young age. The innovative nature of the legal and moral code presented in Torah, especially against the background of the day, is one aspect of the text which we must highlight for children. That it speaks so deeply to the formation of the morality code by which we live today also highlights the potential divine inspiration.

These few examples applied to Tanakh help us create a similar process for the study of all texts, ancient or modern. It is not dissimilar from the way our students study To Kill a Mockingbird together with students at The Davis Academy in Atlanta. Understanding the factors which influence how we read the context of any literature is a vital element for exploring the bias we put into our reading of a text; our Canadian students compare their understanding of this seminal work exploring racial inequality in the South with the understanding of their peers from Atlanta.

Armed with a basic understanding of the world which surrounds the Ancient Israel presented through Tanakh, students can explore similar world literature in other cultures through the same lens. For example, students study a variety of examples of flood myths. A critical investigator of Torah cannot help but acknowledge that the flood story (or stories) presented in Bereishit is stunningly similar to those in a myriad of other cultures. Students must come to terms with how it is even possible that such similarity exists. They are able to hypothesize, just as scholars do, that perhaps this is evidence of the existence of a great flood, and we teach them other theories to help explain the phenomena.

The Bible is not a history book

Perhaps the greatest struggle we have in interpreting Torah in the modern world is our need for it to fit into the patterns of contemporary historiography. Using Joel Lurie Grishaver’s classic material from Learning Torah to engage students at their level, Grade 7 students read the first two chapters of Bereishit side by side and compare the two stories of creation described there. They are often struck by the contradictions which must be “explained away” in order to make Bereishit read as a singular historical account. The most basic example is the presence of water and then the sudden absence of it in the second chapter of Bereishit, which provides an opportunity to explore the reason for the existence of Torah, and how we find meaning in it. Professor Levy first opened the possibility for us that even the Masoretes had a variety of Torah texts before them from which to winnow a definitive scribal tradition, evident as far back as the disagreement in Kiddushin 30a as to which letter is the middle in the Torah (which simple counting demonstrates is far off the center of our accepted Masoretic text today).

Once students can accept that Tanakh is not linear or perfect, that it possibly uses parable as a literary technique and that in the ancient world two separate and contradictory stories of creation could exist side by side, they are forced to search more deeply for their own meaning in the text. For me this epiphany is the most satisfying moment in the study of Jewish text. Freed from the shackles of having to view Tanakh as a linear history of human existence and the Jewish people, the door is now open for each child, as it was for me, to move from a superficial acceptance of the historicity of Torah to a more mature study of the nuance and divinity in a text rife with apparent contradiction.

Armed with a modern approach to the study of Torah, our students must grapple with mature insights into the text and its impact on our Jewish lives. Rabbi Elyse Goldstein teaches that the average adult Jew’s understanding of God is stunted and immature, as many have stopped considering theology seriously after celebrating Bar Mitzvah. If we similarly held onto pre-teen views of love, of adolescent views of sex, how stunted would we be as adults?

Our job as educators is to equip students with the skills and background necessary to continue the quest into a mature understanding of the mysteries unveiled through the study of Jewish text, the most notable mystery being the role of God in our lives and our own Jewish identities. If straightforward logic demonstrates that Torah cannot be a trusted historical account, then what is left for us, for our students, to cling to? Giving students the tools to investigate such complex existential questions provides one of the core elements of our educational experience and ensures that our students can truly be lifelong learners of the most difficult subject matter.

In the introduction to his Torah commentary, Rabbi W. Gunther Plaut says, “The Torah is a book about humanity’s understanding of and experience with God…While individual authors had a hand in its composition, God’s voice may be heard through theirs if we listen with open minds.” Having compared in depth various flood stories, students explore the theory that in fact the story of Noah is a composite of two original tales woven together. Pulling apart the contradictory details (did the flood last 40 days or 150 days?) gives students a realistic understanding of how to understand the structure of Torah, but it opens for them this most difficult question of all, that of the authorship and accuracy of Torah.

Perhaps in contrast to the majority of Jewish day schools in North America, we teach our students the basis of the Documentary Hypothesis as a tool for understanding Torah, to grapple with the possibility that our Torah is not a unified text, but in fact drawn from a variety of sources to tell the story of our people. Just as we teach students the critical skills to discern the bias of the author of a website, we teach them to look into the rationale which may have influenced the various sources. Understanding the human need for order inherent in the first chapter of Bereishit brings us closer to the text as answering deep-seated human questions, in our current era just as in the ancient world. Against this backdrop we can move from a superficial understanding of the role of God in our lives and in the history of the Jewish people to a deeper, more complex struggle that we all have, and must equip our next generation to consider as well.&daims;

Eric Petersiel is the head of school at the Leo Baeck Day School in Toronto, Ontario. He can be reached at epetersiel@leobaeck.ca. 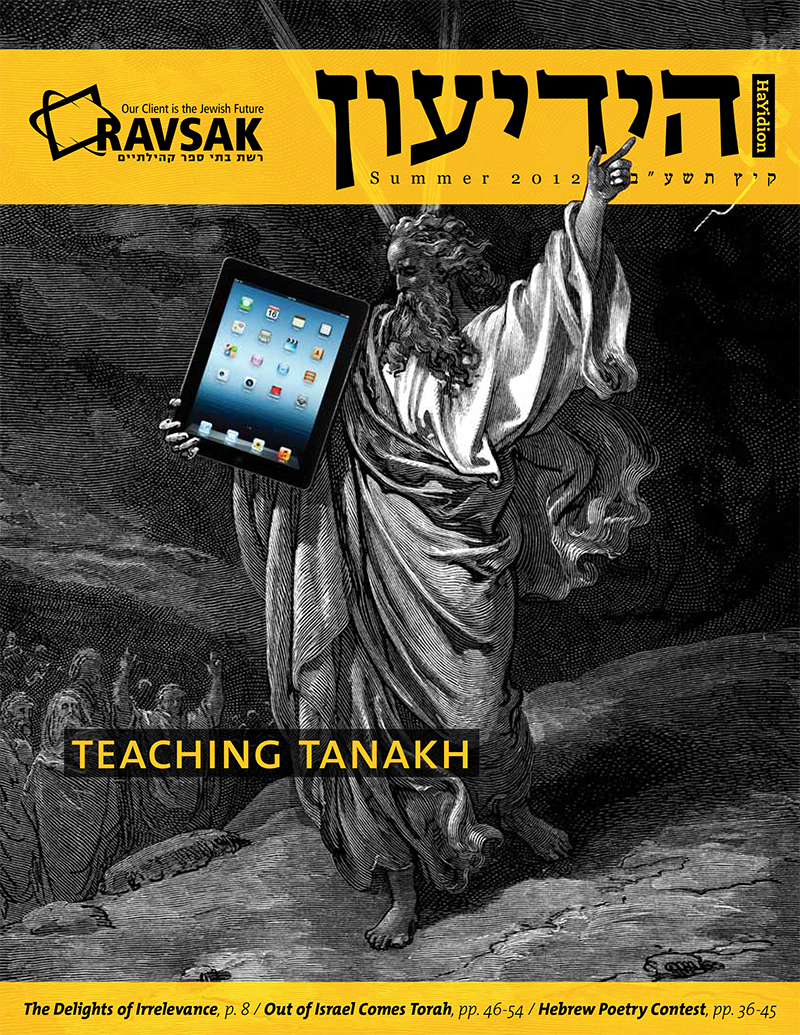