Networking for Better Understanding Among Jews

The term “networking” (rishut) entered Israel’s lexicon around ten year ago. As always, it arrived in Israel from the United States after a fashionable 15 year delay, and shortly before the social-networking revolution on the Internet. Before then, we called the phenomenon of exploiting contacts to gain certain benefits “Vitamin P” (the first letter in the Hebrew word protectziya, or influence peddling); new immigrants especially had to create a network on their own to help them land a good job, enroll their children in prestigious schools, do business—or anything else. The old networking model was composed of small, local networks barred anyone whose identity was not close enough to that of the other members. Personal trust was a significant component in relationships within each network, and lack of trust was a significant component between one network and another. It was reminiscent of ties between Mafia families, and all too often, of the relationships that mark the various groups and sectors in Israeli Jewish society.

Jewish society in Israel is crossed by numerous fissures that weaken it and sometimes even threaten its existence. One of the most conspicuous fissures, certainly in the past decade, is that between the religious and the secular, which features sectoral self-segregation and fear of the Other’s influence on one’s Jewish self-identity and on the Jewish identity of the State of Israel. These modes of thought and conduct characterize the vast majority of Israelis across the religious-secular spectrum: ultraorthodox (hasidic and non-hasidic), national ultraorthodox, national religious, traditional-religious, traditional-secular, and secular. The identity and definition of religious sectors differ from those employed in the United States. For example, the term “traditional” in Israel refers primarily to those of Middle Eastern and North African descent who venerate religious tradition while exhibiting a range of religious observance according to Orthodox Halakhah. The Conservative and Reform streams, as they are known in the United States, are marginal players here.

The dichotomous thinking typical of the vast majority of Israeli society freezes the situation into one of polarization and alienation between sectors and is not conducive to the development of a worldview based on solidarity and mutual responsibility. This thinking also generates ethical and material competition among the sectors and turns diversity into a source of perpetual conflict on issues such as the Sabbath observance in the public sphere, the status of women, and equal sharing of the burden of military service.

As such, there is clearly a need to create a network that links the various groups and sectors in such a way that its members regard multiple opinions and worldviews as a source of richness rather than of ongoing conflict.

Tzav Pius (An Order for Reconciliation) was established by the AVI CHAI Israel Foundation in reaction to the tension between the religious and secular communities that erupted after the assassination of Prime Minister Yitzhak Rabin. Since its founding in 1996, it has worked in various ways to build a society in which Jews with different approaches to religion can live together in understanding and mutual respect, with a sense of partnership and shared responsibility.

Initially, the organization relied on networking as a tool to effect social change; all of its work in the field focused on creating networks in order to connect individuals willing to defy social conventions, to breach the boundaries of their comfort zones in order to get to know their brothers and form significant bonds with them, ranging from informal discussion to deep friendship.

Before the advent of online social networks, our basic tool was the dialogue group with professional facilitation, to which individuals from all sectors were invited. In order to create a significant network from the motley collection of strangers we recruited, and in order to form peer groups of people with diverse identities, at least in relation to religion and tradition, we had to find a common denominator. In every group, we made sure that the participants from the various sectors belonged to the same socioeconomic class; in some groups, they even had the same or related occupations. Thus, we created dialogue groups for journalists, senior educators, politicians, university students, teenagers, and others. Some groups were for men or women only, although we never received a request for such division from potential ultraorthodox participants. To permit a process that would be as impactful as possible, we set a threshold condition that groups hold at least ten biweekly sessions.

Over the years, we initiated and supported the formation of hundreds of dialogue groups, each receiving individual guidance by our staff. We also engaged in professional research and evaluation. To assess the impact of the process on group members, we focused on the change in their cognitive view of the Other and how it was manifested practically in their everyday life, starting with changes in how they talk about the Other, to the creation of friendships that persisted even after the series of meetings was over. For example, most members of the journalists’ group we set up 15 years ago remain in touch today; the contacts formed then served some in their professional work and made it possible for religious and ultraorthodox journalists to find jobs in the general media.

Besides creating trans-sectoral social networks, we focused on setting up a network of “ambassadors” to disseminate our messages in the various sectors—people with a more complex worldview who speak in a new language, one that is not dichotomous but accepts and respects differences. It is difficult to quantify the influence of these people on the wider circles of each sector, let alone on Israeli society as a whole. Nevertheless, some of them are now involved in social projects that create bonds that cannot be taken for granted. An example is Jerusalem mayor Nir Barkat, who credits his participation in a dialogue group with the ultraorthodox before he was elected as a major help in running such a complex city.

In the wake of the penetration of Israel by the most active social network—Facebook—we decided to avail ourselves of it in our work. Two years ago we set up a Tzav Pius page; today it has more than 18,000 friends who see themselves connected to one another at various levels of commitment, manifested by their level of activity on the page. Every day we post opinion columns on diverse topics related to our agenda, which spark discussions among the members of the virtual community. In tandem, surfers raise issues that concern them, generally related to current events. As part of our efforts to encourage the members of the network to be active, every week we host a public figure in a virtual encounter and discussion, someone who is not usually accessible for questions and discussion with the general public, such as a government minister, member of Knesset, mayor, author or artist.

Over the years, we have employed additional methodologies, such as an experiential platform in work with teenagers or Encounters on the Israel Trail, a trek for those aged 18 and older that offers them opportunities to meet those they might never encounter in any other way: religious and secular, settlers and leftists, kibbutzniks and residents of development towns, young and old. There is an educational program that accompanies participants along the journey. Although the trek lasts for two months, people can join for one day or more, as much as they are able. Over the past seven years, more than 6,000 people have taken part in this unique journey, which generates networks that continue for many years; several married couples even met on the trek.

In recent years we decided to focus on creating more closely knit networks that demand much more commitment. In this way, as the years progressed, and against the backdrop of the various changes that have taken place in Israeli society, Tzav Pius has increasingly begun to intervene in guiding and encouraging the creation of new joint communities of the religious and secular (but without ultraorthodox participation, unfortunately), a phenomenon that began in the late 1990s and has picked up speed in recent years.

Today there are more than 40 such communities, rural and urban, longstanding and newer, that see themselves as the standard-bearers of a new form of pioneering, social pioneering. Many of these communities are not content with working internally to devise policies that facilitate coexistence. They also turn outwards, to Israeli society, with a desire to do their part in social action, especially by strengthening disempowered sectors that live nearby. Tzav Pius works in various ways to support both veteran and young communities and assists in the founding of new communities, in collaboration with other partners such as the Ministry for the Development of the Negev and the Galilee, Mirkam (the umbrella organization of mixed communities), and the Ayalim student villages.

The integrated schools for religious, traditional and secular pupils are the crown jewel and main anchor of most of these communities. They bring a new message to Israeli society in general and to the school system in particular, by cultivating a new paradigm for trans-sectoral social networks. The Israeli public school system, divided by sector, does not accurately represent the complex reality that moves along a continuum of worldviews. By contrast, these new joint schools have a curriculum and pedagogical system suited for teaching pupils with diverse identities, similar to RAVSAK schools.

The relatively small number of such schools (about 20) does not reflect the growing interest among parents who want their children to attend schools that combine a value-based and socially conscious worldview with quality education. The integrated schools are known as quality schools and demand for places in them is high; in many instances, they also serve as the community anchor that draws young families to the locality. All of the integrated schools are part of the public school system and teach curricula that have been approved by the Ministry of Education.

I know that the social context in which RAVSAK operates is not similar to that in which Tzav Pius works. Nevertheless, both organizations seek to employ educational activity to promote mutual respect and solidarity among Jews with diverse worldviews and lifestyles in their several communities and in society in general. Over the years, most of our programs were designed for adults, because we believed that they are better able to deal with the complexities generated by the encounter between divergent identities. Today, though, it has become crystal clear that we must focus on educating the younger generation, from preschool to the early 20s, in both formal and informal settings.

In the past few years we have channeled most of our resources to building frameworks that facilitate coexistence among those who grew up in parallel tracks of life but see the anomaly in this and would like to change the situation. Such frameworks—joint communities, integrated schools, mixed pre-military academies, joint batei midrash, etc.—go beyond discussion among the different groups, seeking to weave a Jewish agenda for living together. They reject the “religious-secular” dichotomy and aim to develop a new, pluralistic Israeli center that is deeply committed to Jewish, democratic and civic values, in which the similarities between the groups that compose it outweigh the differences. Tzav Pius’s growing involvement in this fascinating arena stems from the feeling that these frameworks, despite their modest scope at present, have the potential to serve as a workshop for redefining the way we understand Israeli society, serving as both a fountain of progressive Israeli-Jewish creativity and a force that can unify Israel’s diverse communities.♦

Aliza Gershon is the director of Tzav Pius in Israel. She can be reached at aliza@tzavpius.org.il. 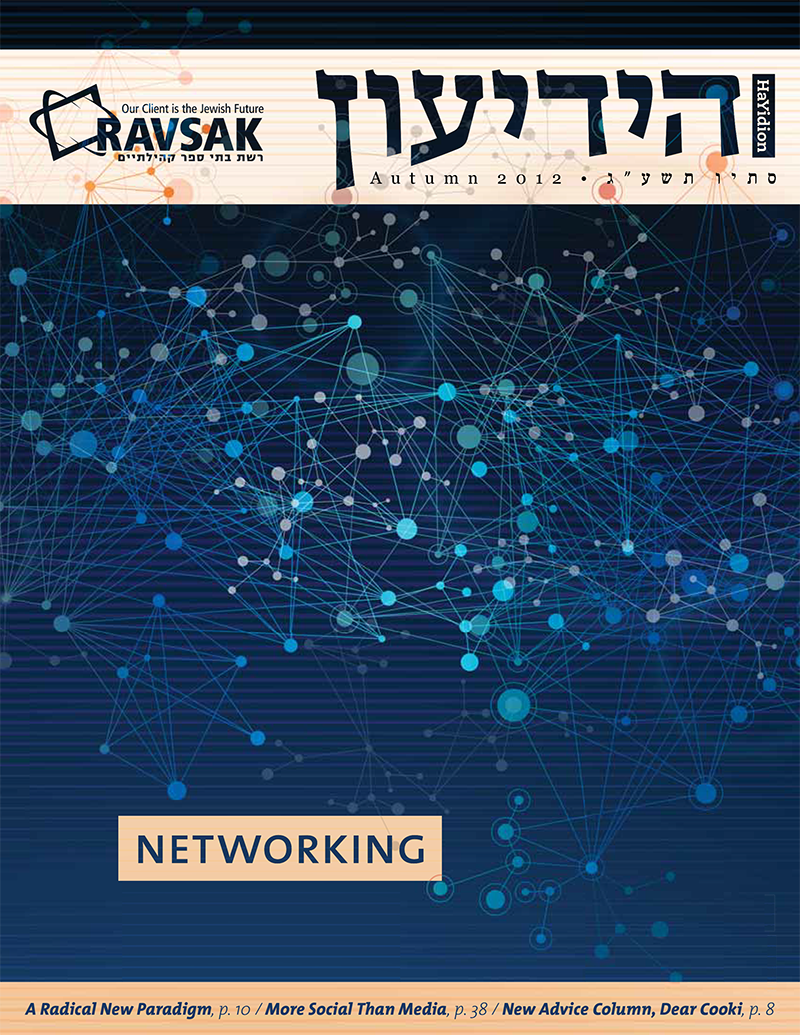