Each summer, I have the privilege of partnering with The AVI CHAI Foundation to lead two cohorts of day school leaders through a program at the Harvard Graduate School of Education. During the day, our cohort are full participants in one of two programs at the Principals’ Center of the Harvard Graduate School of Education, Leadership: An Evolving Vision or Improving Schools: The Art of Leadership. In the late afternoon and evening, we look at Jewish perspectives on the Harvard learning of that day. We analyze how the learning can be applied to our Jewish day schools with their own distinctive cultures and communities. The work is intensive but highly rewarding, as participants consistently report the great value they receive by framing the learning in the context of day schools.

While most of our work is planned, some of the most rewarding learning emerges serendipitously. When we first saw the speaker list for the summer 2016 Harvard program, we noticed that Howard Gardner was a speaker. The inclusion of Gardner, best known for his seminal work on “multiple intelligences,” was exciting, both because of his expertise and also because this was the first time that he had spoken at the summer institute. His subject matter was leadership, and much of the content of the talk was based around his book Leading Minds: An Anatomy of Leadership. One assertion that Gardner made resonated deeply with our cohort and unexpectedly came to frame our entire week of learning leadership dispositions through a Jewish lens:

It is important for leaders to know their stories; to get them straight; to communicate them effectively, particularly to those who are in the thrall of rival stories; and, above all, to embody in their lives the stories that they tell.

Gardner highlighted the power of a leader’s authentic story on his or her ability to be effective as an educational leader, and the pitfalls that arise when there is a disconnect between the values of our stories and the dispositions that we demonstrate.

After the lecture, I asked the group about their own leadership stories. Did they have a story? When was the last time they proactively revisited their story? Do their school stakeholders know it? And perhaps, most importantly, did their stories meet the Gardner test of a leader needing to “embody their lives in the stories that they tell”?
The session that followed was one of the most inspiring that I have attended. Each member of the cohort took the time to rehearse the story of his or her path to becoming an educator in a Jewish day school. The group split into pairs that shared their stories, and then two of the 13 members of the cohort told their story to the group. Two things ensued, one planned and one spontaneous. As per our plan, each member of the group considered whether their leadership traits and dispositions were reflective of their personal story, and also whether their school stakeholders were aware of this story. This exercise went to the core of our work as leaders and particularly the relationship between our personal Jewish journeys and the actions that define our leadership.

An example best illustrates this. (Some details are changed to protect confidentiality.) One of our participants explained that she grew up in a non-observant Jewish household where there was a strong emphasis on recognizing and celebrating different religious approaches. Her parents were strongly of the view that there was no single authentic interpretation of Judaism, and that different denominations had equal validity. This woman made a choice after high school to study for two years in an Orthodox Women’s Seminary in Israel, after which she returned to the States and received a degree in education at Yeshiva University. She became a Jewish studies teacher and worked her way to the position of head of school of an Orthodox girls high school. In that capacity, she was involved in highly charged deliberations at the board level as to whether the admissions criteria were effective, and there was criticism of the fact that the school was admitting students who were not “mission appropriate,” which in this case referred to their level of Shabbat observance.

The head of school concurred with the board’s decision to be more rigorous in vetting future applicants so as to ensure a more homogeneous community. That being said, she was finding it more and more difficult to apply it in practice, and was unsure as to the basis for her discomfort. It was not until we did the exercise at Harvard during the summer that the pieces came together for her. Her story took her on a journey from a home that was characterized by respect for different levels of observance, and she was asking herself to do something that contradicted her own story and in her words, to “build a hierarchical structure of authenticity as part of the admissions process.” Long story short, she left the school, not because she thought that the school was doing anything wrong but because she concluded that her own authentic priorities did not fit well with those pursued at the school. In the scheme of the Rosov report, this scenario created some tension between the leadership capacities of vision setting and community building on the one hand and the disposition of integrity on the other.

Alongside this planned analysis of each person’s individual story, the participants spontaneously requested the opportunity for each member to share their story with the group as a whole. They arranged a schedule for three stories per evening, and the experience of hearing one another’s stories, filled as they were with self-reflection, honesty and motivation, was inspirational and transformational. By the end of the week, we were bound together through the closeness that they had built through their willingness to take a risk by sharing their personal and professional journeys. That bond remains in place two years on, with the cohort still in active communication on educational issues, social connections and a welcome dose of irreverent humor. The experience has powerfully strengthened the participants sense of their own calling and commitment to their work as Jewish educational leaders.

The Harvard program has focused on building skills primarily in instructional leadership, personnel empowerment and organizational management. Over the years, I have seen a welcome increase in the learning that has taken place around community building, with sessions on parent involvement, effective use of communication tools and the impacts of culture on school change. Our work is not to dictate the correct answers or the ways in which the learning must be applied. Instead, we facilitate a process within which our participants absorb the learning of the day, reflect on their personal and institutional goals and motivations, and then bring those experiences together so as to advance the Jewish learning experience and long-term Jewish commitments of our students. 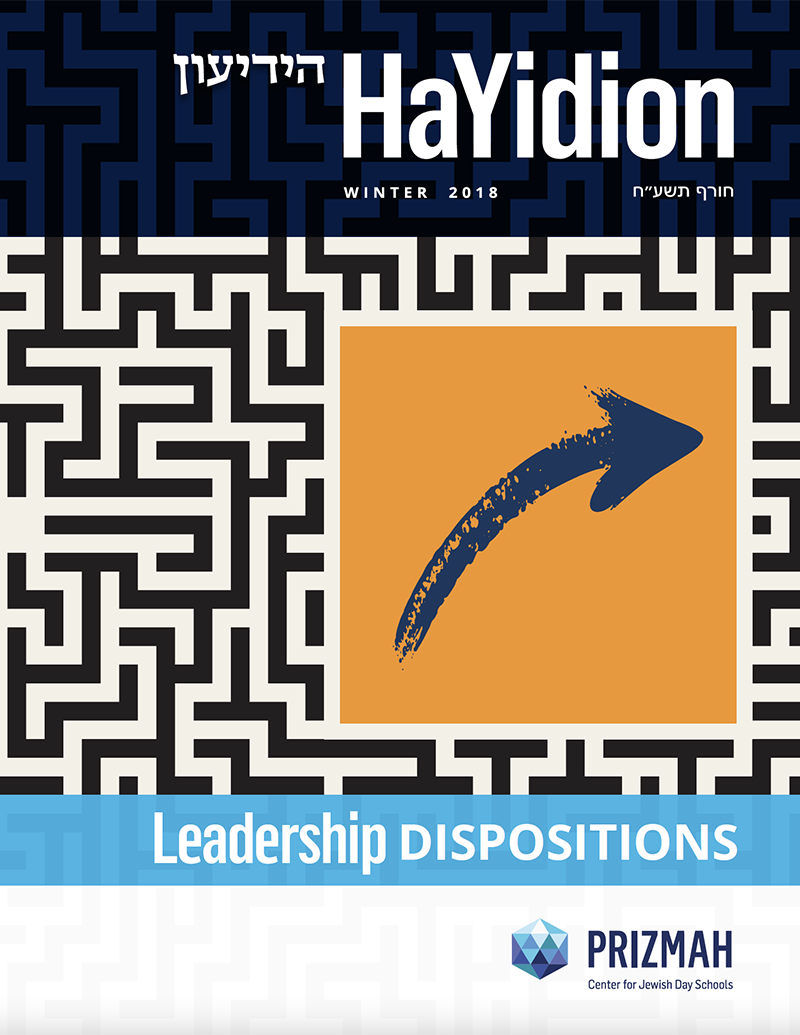