Participants learn to weave together multiple narratives and voices in order to create one communal story; and to invest heavily in achieving optimal group dynamics.

From its very inception, the Ramah camping movement was configured as an incubator for leadership. Designed as an immersive experience with what Jonathan Sarna of Brandeis University notes was the openly subversive goal of cultivating a Jewish elite, Ramah focused its efforts on teens and young adults, “the age group most susceptible to role modeling and to rebelling against parental authority, to create a distinctive identity that would be reinforced by peers and role models. In this way,” writes Dr. Shuly Rubin Schwartz, Dean of Graduate and Undergraduate Studies at The Jewish Theological Seminary, “the leadership of Ramah hoped to invigorate Conservative Judaism by cultivating an elite that would be more dedicated, knowledgeable, and more observant than their parents.”

In the aftermath of the Shoah, with the founding of the first Ramah camp in 1947, Conservative Jewish leaders focused on the urgency of Jewish survival. Their belief in the long-term value of the Conservative Movement’s approach to Jewish life fueled an intensive focus on the development of leadership at Ramah camps. The three key pillars of the Ramah experience, in place to this day—Hebrew language, Jewish living, and Judaic study—created the framework for an immersive camp experience where children and teens would be motivated to embrace a lifestyle grounded in Jewish values, ritual, and learning.

As Rubin Schwartz notes in a recent article (“The Three Pillars of Ramah,” published in Ramah at 60: Impact and Innovation), the North American Jewish community has been transformed since those early years into one that has a much deeper Jewish life, characterized in part by the rise of the day school movement. In response, the elitist agenda of the Ramah movement’s founders has given way to much more inclusive goals, seeking to reach and engage as many young Jews as possible. Yet Ramah’s outsized impact on the community—significant numbers of North American Jewish communal leaders are Ramah alumni—reinforces the belief that a core mission of the Ramah camp experience must remain leadership development in its broadest sense, to serve both the Conservative Movement and the greater Jewish community.

A recent study of Jewish camping by Amy P. Sales of Brandeis University, Limmud by the Lake II, notes that retention of staff after one year at Ramah exceeded the North American average by fully ten percentage points, with 67% of staff choosing to return. And by almost ten percentage points again, Ramah staff are well ahead of staff at other camps when they point to the Jewish life at camp as being a key reason for their return. With the exciting launch of the Ramah Service Corps last year, dozens of staff alumni are now able to leverage their leadership skills and talents in year-round communities to help invigorate synagogues and days schools and encourage recruitment to Jewish camp. The Service Corps was the next logical step in the progression of Ramah leadership development, and its members are performing beyond expectations.

What is the Ramah training formula? In the context of a 24/7 environment, these young people are growing, living and learning among peers who share their passion for Jewish life. They are given multiple opportunities to excel and shine with peer encouragement, learning hands-on skills to help them serve as Jewish leaders, including religious inspiration, Hebrew language, and deep familiarity with Israel. I have been amazed at the high level of a 17-year-old’s dvar Torah; the maturity of a 19-year-old inspiring her campers to bond while davening with peers in the Tikvah special needs bunks; the lessons in environmental awareness taught at our new adventure camp in the Rockies; and the excitement of 10-year-old campers using complete Hebrew sentences with raucous encouragement from the camps’ college-age staff.

In recent years, Ramah has invested heavily in new movement-wide programs for staff training, supported by over $4 million of grants from national foundations. New programs now exist in tefillah, Hebrew language, youth philanthropy, Israel engagement, service learning, social networking, campus leadership and special education. Most remarkable has been the transference of these leadership skills from camp contexts to overall career and life choices.

The more we invest in the training of young adults, the higher percentage of these camp leaders we find seeking careers in Jewish education and serving as Jewish leaders on campus, in schools, and in other synagogue settings.

At Ramah’s national training programs, young staff members learn to apply what they experienced as campers to a broader understanding of leadership development. The energy generated by dozens of young leaders coming together plays an important role in propelling each participant forward on their leadership path. Participants learn to set the right environment for learning; to facilitate positive interpersonal dynamics; to weave together multiple narratives and voices in order to create one communal story; and to invest heavily in achieving optimal group dynamics, which are at the heart of a successful effort in both experiential education and in community building. Importantly, Ramah also teaches staff members to aspire to the highest professional standards by creating and collaborating on best practices, and by embracing the ongoing pursuit of knowledge. By the conclusion of their Ramah careers, many of these young leaders are more than ready to become teachers, motivators, and influencers in their Jewish communities.

As Ramah continues to grow and strengthen our existing camps, our mission is expanding to provide more year-round and lifelong leadership experiences, often in partnership with other institutions, including day schools. A recent $2 million grant from the AVI CHAI Foundation and the Maimonides Fund will help us create a new alumni division to propel this mission, and we look forward to working closely with school and synagogue leaders who understand that working together, and using all twelve months of the year for intensive Jewish education, will be essential to building stronger communities and effective leaders. ♦

Rabbi Mitchell Cohen is the director of the National Ramah Commission of the Jewish Theological Seminary, and Debbie Nahshon is a National Ramah development consultant. They can be reached at Mcohen@jtsa.edu and Debbie@campramah.org. 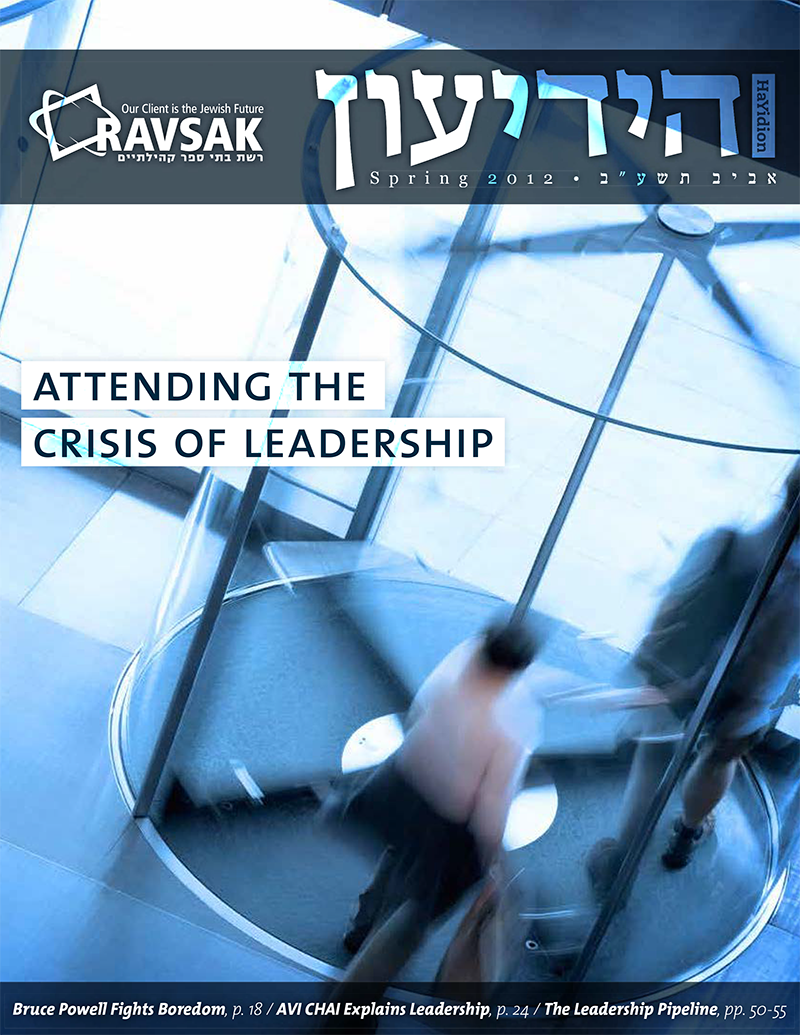 Partnership and Support for Interschool Collaboration