From Day School to JDub

Tell us about your musical life today and your accomplishments as a musician.

My band is called DeLeon. We play Sephardic folk songs, but they come out sounding like rock songs. The songs are either in Ladino, Hebrew or are translated into English. I’m the front man as well as the guitarist and banjoist. We’ve got our first record coming out on JDub in a few months. I became involved with JDub via another band I’m in called The LeeVees, known internationally for their original pop-rock Hanukkah songs. I’ve been playing in bands since high school and had my greatest commercial success with a band I was in while in college. We were on Atlantic Records, had videos on MTV and toured the east coast with Outkast. Our debut on TRL and album release were on 9/11/01 and given the goofy upbeat nature of our record, for obvious reasons it didn’t sell as many copies as the label was hoping. Our next album was more serious and sophisticated, and as far as I know is gathering dust in an Atlantic Records broom closet, having never been released.

In recent years there’s been much talk of a “renaissance” of Jewish music. Do you feel that’s true and that there is a new Jewish music scene?

I’m no ethnomusicologist, but I bet at any time it would seem like there is a renaissance in Jewish music, be it Mickey Katz, Shlomo Carlebach, John Zorn, or The Klezmatics. Jews love to rediscover and reinterpret their heritage. Those names are just from the last 50 years, but I’m confident you could go back as far as you’d like and find Jewish music innovation. Nowadays with the web and home production it’s easier to be aware of all the innovation going on, and easier to be part of a scene. There are Jewish musicians using sampling, and drawing from other cultures and blending any and all influences into their music to create new Jewish sounds. Jewish music has the unique ability to be secular and Jewish at the same time, unlike say Christian music. So Jewish musicians can mine the culture in an infinite amount of ways without being restricted by the confines that come along with being a religious musician.

Tell us about your day school background.

I attended Charles E. Smith Jewish Day School in Rockville, Maryland, from K to 12. A long while, especially for a kid from PG [Prince George’s] County, frequently over an hour commute away. I remain friends with a number of kids from my class, and one of them happens to be our bassist, Kevin Snider. I have nothing to compare the quality of my education to, but I’m told it was good. I teach music part time in Bronx public schools now and I’m thankful that we had smaller classes than they do, but I’m envious of the diversity of students and classes that they have. It’s strange to think that we had minyan every morning. I sometimes enjoyed it because I was so very tired by the time I got to school and it was a mellow transition into the day, but I have memories of teachers hassling me to pray and that’s not a policy I agree with. What was nice is that it was a small pond so I was able to participate in just about anything I pleased, which tended to manifest itself for me in musical ways.

When did you start to get into music?

I’ve been an omnivorous music listener for as long as I can remember. I have distinct memories of being a music snob in kindergarten, showing off my Van Halen tapes and wearing out my Queen mix. I took piano lessons from ages 6-10 and got into guitar in middle school because my brother had one and I liked how loud it went. I also began taking drum lessons around that time. By eighth grade I was in a band with other kids from my class and was in at least two other bands by the time I graduated. JDS didn’t have a high school music department until a group of musicians from our class persuaded the school to create one. They ended up hiring my drum teacher who guided the newly formed school band through classics by Hall and Oates, Steely Dan, and The Jackson 5. Around that time the band I was playing with became the school pep band, and played alongside school basketball games. We had a song attributed to each kid on the team that in some way referenced their personality or musician they liked—i.e., Ben Landy liked Leadbelly so we played “Alabama Bound” each time he scored. Like I said, since it was a small pond we could basically write a lot of our own rules.

Did the day school give you a solid musical training?

More significant than the actual musical training I got at JDS was the environment of being around other musical people and being able to do things like the pep band and the school band without much interference. A part of that is because a good percentage of my classmates were well off enough that their parents had bought them electric guitars or drum kits, and had basements or garages we could practice in. I realize what an advantage that was now that I teach in a lower income school. My students for the most part only have access to the guitars that belong to the school. Other than that, there wasn’t any musical training to speak of for most of my time at the school.

When were you first aware that you wanted to be a professional musician?

There are professional musicians? That sounds great! I think I’ve always wanted to be a professional musician, well at one point, I wanted to be a space scientist, which I would still like to be. I’ve also always been aware of how hard it is to make a living being a musician, and for the last couple of years of high school and my first few years of college I was set to become a union organizer. I had a longtime fascination with the labor movement that was born out of the union songs my dad used to play in carpool, but music kept interfering so despite my efforts at saving myself from a life of guitarmony, my quest for workers’ rights had to take a back seat to being on tour.

Did your day school instill in you a sense of being a Jewish musician?

I think my growth as a musician and as a Jew both have roots at the day school, but it wasn’t until relatively recently that those two aspects of my identity began to merge in this way. There’s no doubt that having the background that I have and a core group of friends with the same background surely has something to do with the fact that I’ve found myself exploring the world of Jewish music. In some ways I think me being a Jewish musician is a continuation of a family trade. My father is a rabbi in the DC area, and I see a lot of similarities between his work and mine. The sharing of ideas from a stage and desire to be a community leader plays a role in both of our professions.

What does being a Jewish musician mean to you?

Well, I’ll put it like this. In college, when I was choosing my rap name, because at that time kids in college required rap names, I chose Shank Bone Mystic. “Shank Bone” because I’m all about seder. And “Mystic” because I’m a descendant of great kabbalists. Being Jewish is a malleable quality that can be approached from any number of artistic angles. I’ve chosen to call myself Shank Bone Mystic and play songs about love, G-d, murder, and vice on the electric guitar and banjo in Ladino and that’s how I am a Jewish musician. But that won’t be everyone’s take on it.

What would you like to tell aspiring musicians who attend Jewish day schools today?

Quit messing around and form a band. ♦

Dan Saks is a Brooklyn-based musician and a member of JDub recording acts DeLeon and The LeeVees. Dan’s website is www.ilovedeleon.com. He can be reached at ilovedeleon@gmail.com.
Author
RAVSAK Staff
Issue
The Arts in Jewish Education
Published: Summer 2008 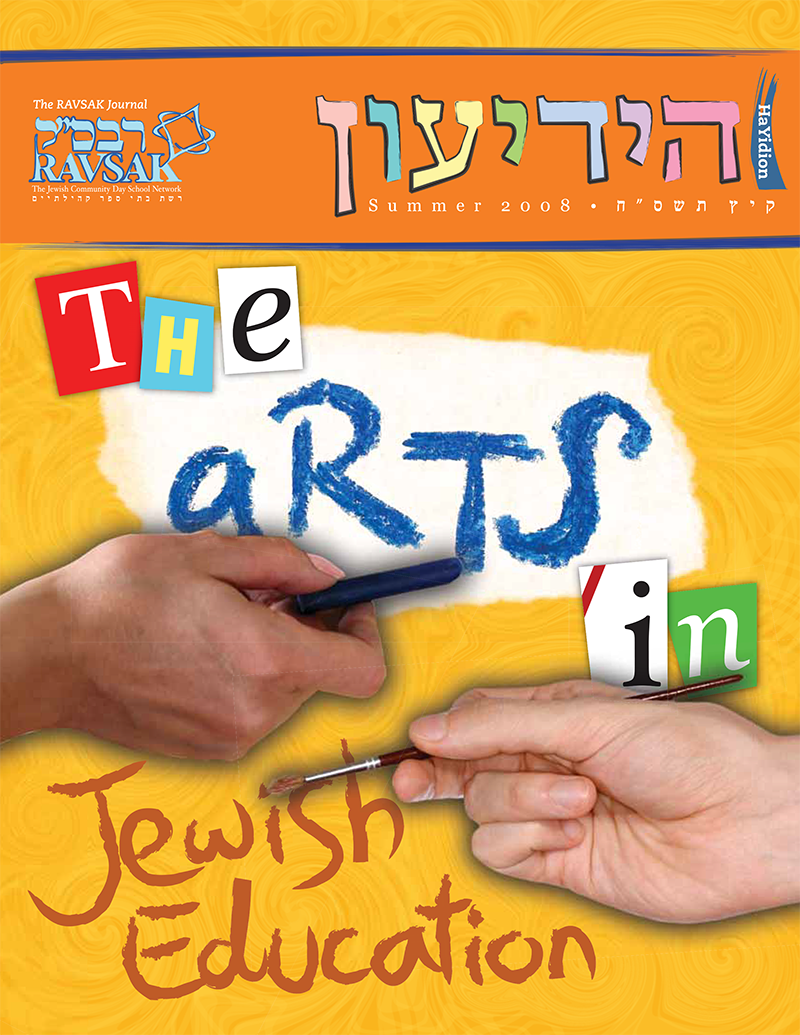